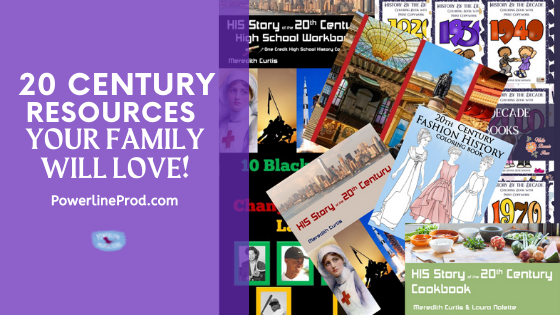 March 11, 2022 in 20th Century History, Homeschool Resources, Homeschooling 1461
Tell the world what you have found here!

I’ve always enjoyed learning about the 20th Century because of my close relationship with my grandparents who were born in 1904. We have accumulated some amazing resources as a family that we want to share with you! If you want to dig into 20th century history, you will love these homeschooling history resources!

Do you want to learn more about the 20th Century?

Here are some resources we’ve discovered and created that you and your family will love!

HIS Story of the 20th Century

With a desire to study the 20th century with my teens, I searched high and low for a good look at the 1900s. I wanted to give my kids an honest look back: to see how 2 world wars changed the world as folks knew it, medical breakthroughs, technological advances, God’s heroes who stood tall, and how Communism devastated the countries it conquered. Sports, games, fashion, music, art, architecture, and fun fads were important to me, too.

I couldn’t find what I was looking for, so I wrote my own living textbook/unit study with living books, hands-on learning, and all kinds of fascinating history to explore. We have had a blast with HIS Story of the 20th Century!

Did you know you can take 20th Century World history online at True North Homeschool Academy?

I teach high school and middle school students using HIS Story of the 20th Century.

For middle school students, Junior High Twentieth Century History online class at True North Homeschool Academy will be a great adventure back to the last century. Sign up HERE.

HIS Story of the 20th Century Workbooks

There are 2 workbooks to go along with HIS Story of the 20th Century: 1 for middle school and 1 for high school. Each workbook contains timeline pages and figures, map work, family trees, a living book for each decade, and creative practical assignments like designing your own airline or creating an amusement park. Kids love these assignments!

You can purchase HIS Story of the 20th Century High School Workbook at PowerlineProd.com. Purchase in print at Amazon.

You can purchase HIS Story of the 20th Century Middle School Workbook at PowerlineProd.com. Purchase in print at Amazon.

If you’re looking for a delightful music appreciation course, check out 20th Century Music Appreciation for High School at Music in our Homeschool.

The 20th Century Music Appreciation course consists of 36 lessons about the music, genres, styles, composers, and performers of the 20th century to the present day. A wide variety of styles from all decades of the 20th century from America, Europe, and South America are included: ragtime, big band, jazz, opera, ballet, impressionism, expressionism, atonal, serialism (tone row), chance music, guitar, piano, symphony, film music, folk music, rock and roll, musical theater, and more. The course includes written lessons, videos to watch to learn more about concepts and to listen to the music, assignments to complete using printables which are provided, and online quizzes. The course is easily adaptable to ages as young as kindergarten and is perfect for the homeschool co-op setting.

HIS Story of the 20th Century Cookbook

Purchase HIS Story of the 20th Century Cookbook at PowerlineProd.com or in print from Amazon.

I love everything from WriteBonnieRose! These coloring books have traceable copywork at the bottom of each picture so that they learn as they color. In Titanic Coloring Book, children learn all about the luxurious ship and its tragic end.

There are also several more coloring with traceable copywork to make learning about the 20th Century easy and fun!

Finally, one of my favorites: History by the Decade Coloring Bundle. This is a great way to combine coloring, learning 20th Century History, and handwriting practice!

Beyond a coloring book, students get to do a little fashion designing of their own with this 20th Century Fashion History Coloring Book. Purchase at Amazon.

Lapbooking is fun for all ages and a great way to meet athletes who made history! Meet 10 gifted athletes who broke the color barrier in the 20th century. Purchase 10 Black Athletes Who Changed the World Lapbook at PowerlineProd.com.

TV Shows of the 20th Century

Movies of the 20th Century

Music of the 20th Century

Tell the world what you have found here!
Tags: HIS Story of the 20th Century