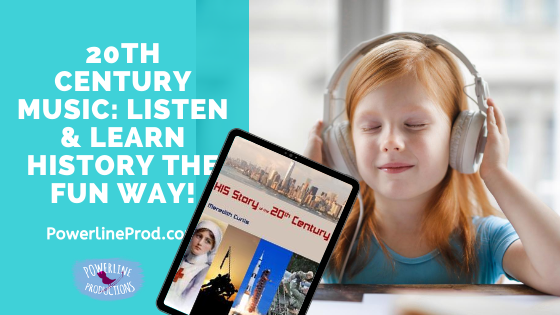 April 8, 2021 in 20th Century History, Homeschool Resources 781
Tell the world what you have found here!

Nothing brings history alive like music. The 20th Century is a smorgasbord of amazing music from ragtime and Broadway to rock-n-roll and country.

Twenty Songs of the Century

Originally an album of beautiful music from the 1910s, 1920s, 1930s, 1940s, and 1960s, this soothing album has been remastered and is available on CD. Twenty Songs of the Century contains songs like “Moon River,” “Summertime,” “Solitude,” “Cheek to Cheek,” “Yesterday,” and “Bridge Over Troubled Water.” Purchase at Amazon.

John Williams created some of the most familiar music in the 20 Century and John William’s Greatest Hits 1969-1999 is packed with great music! Listen to “Star Wars Theme,” “Jaws Theme,” “The Imperial March,” “Raiders March,” “Jurassic Park Theme,” and 23 other familiar movie soundtracks. Purchase at Amazon.

HIS Story of the 20th Century Textbook

Hymns from the Old Country Church

Step back in time to the 20th Century when folks went to church and sang hymns. After church came the old-fashioned Sunday dinner. Hymns from the Old Country Church includes some of my favorites all down in Country-Gospel style: “Amazing Grace,” “In the Sweet By and By,” “Love Lifted Me,” “Nothing But the Blood,” and 11 more! Purchase at Amazon.

This music is fun and a good selection to give you a feel of early rock. Early Rock-n-Roll Cruisin’ Classics from the 50s & 60s takes you back to the days of cruisin’ in your convertible to the drive-in. Purchase at Amazon.

Country’s 20 Classic Songs of the Century

Stroll down country music memory lane from the 1950s to the 1990s with Country’s 20 Classic Songs of the Century. Enjoy Patsy Cline, Hank Williams, Dolly Parton, and other country music greats in this classic collection. Purchase at Amazon.

Head to historic Detroit where Motown was birthed and listen to the soulful sounds of the Supremes, Smokey Robinson, Marvin Gaye, Temptations, Lionel Richie. 101 Motown Anthems is a collection of 5 Cds. I would listen to some of the newer songs first before you share them with your children. Purchase at Amazon.

Broadway plays in the 20th Century delivered songs that Americans came to love. Ultimate Broadway is a collection of amazing move soundtracks with “Sound of Music,” “Oklahoma,” “There’s No Business Like Show Business,” “Seventy-Six Trombones,” “Hello Dolly,” “Mame,” and “The Impossible Dream.” There are 40 show tunes for you to enjoy! Purchase at Amazon.

Check out all the good music from 1900 to 2000! Of course, there’s so many more albums you can listen to, but these Cds are a great start!

HIS Story of the 20th Century Series

Until the next time, Happy Homeschooling!

A lazy day of couch potato homeschooling turned into a beneficial learning experience that we have repeated many times. #20CenturyTVShows #LearnHistorytheFunWay Read Watch Your Way Thru the 20th Century blog post HERE!

Tell the world what you have found here!
Tags: 20th Century Music, HIS Story 20th Century