Host Your Own Vaudeville Show to Study History the Fun Way 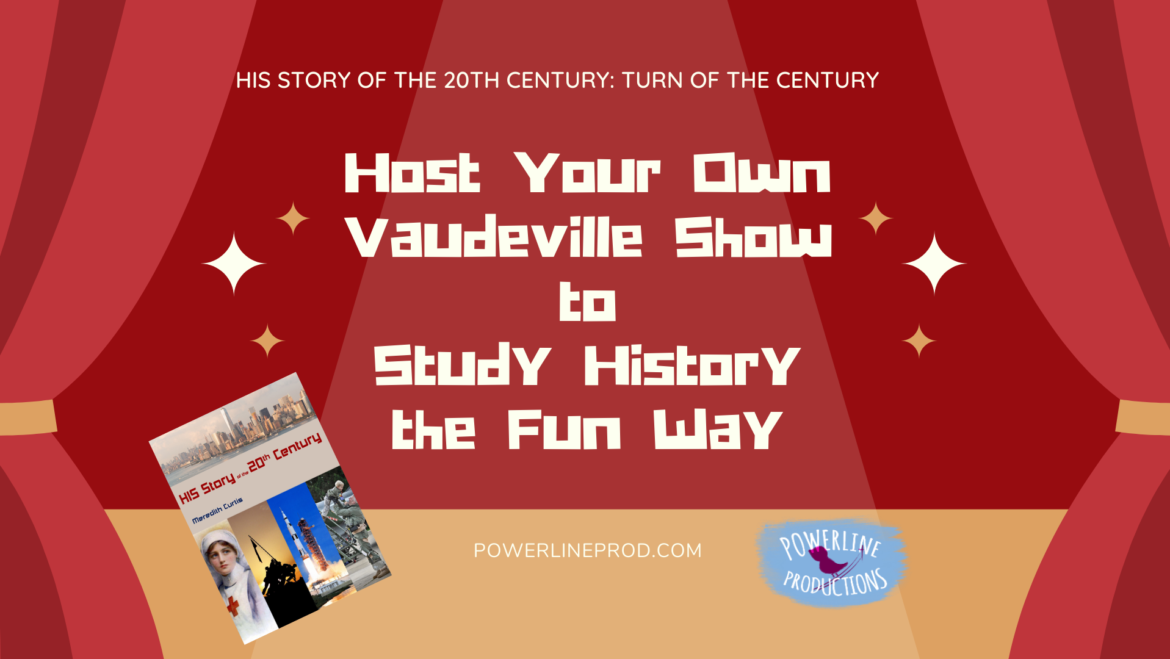 Vaudeville was popular at the turn-of-the-20th-century and we were just starting HIS Story of the 20th Century at the beginning our homeschool year.

We decided to have our own Vaudeville show! It would be fun! Everyone would do at least one act and we would all dress up from the time period.

“Can we do a duet?” two girls in the 20th Century History Co-op asked. We were planning our own Vaudeville Show in our homeschool co-op.

“Is the song from the Turn-of-the-Century?” I replied.

Before they could answer, Jimmy interjected, “Can I do card tricks?”

“Yes, but maybe you want to do an animal act,” I giggled.

We had as much fun planning our acts as we did on the day of the actual performance.

4 years later, our children had graduated, but Laura and I were still leading a homeschool co-op. Again we were studying 20th Century history with the HIS Story of the 20th Century series.

We decided to have another Vaudeville Show. This time we would serve popcorn and invite the whole church.

​Would you like to put on your own Vaudeville Show?

Here’s how we did it! We included our family and friends in this festive occasion. Everyone, individually or with one or two others put on an act: sang a song, danced, did card tricks performed an illusion, performed a comedy routine or slap-stick comedy routine, played an instrument, acted out an inspiration skit, or did an animal act. Think variety show like Carol Burnett or Bob Hope (does anyone remember those shows?).

We set a time limit of each act 3-5 minutes—very short acts!

Everyone had to dress from the Turn of the Century. We researched fashions from that time period and tried to dress authentically.

To get our creative juices flowing, we watched Vaudeville acts on YouTube and old movies.

Here’s what you will need to put on your own show:

Here are some ideas for your students:

Don’t forget to do a Walk-Through Before the Actual Show—so that everyone knows how to get on and off the stage.

We needed the following people to plan beforehand and oversee the night of the show:

Wow! Having your own Vaudeville Show is a fun way to learn about the 20th Century and is actually a history lab that is part of ​a one-credit high school world history course,  HIS Story of the 20 Century. You can purchase HIS Story of the 20th Century in print on Amazon and the E-book at PayHip, TeachersPayTeachers, and right here on this site. Check out the whole series here.

​I hope I have whet your appetite to learn more about the 20th Century the fun way! It is an exciting time in history to delve into!