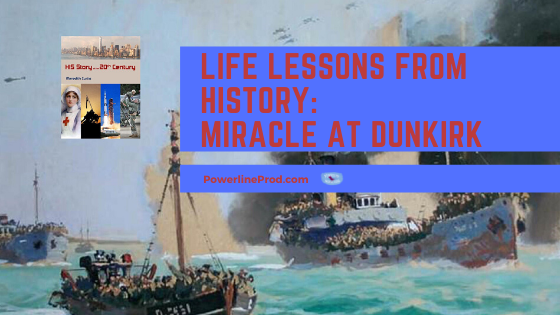 “I can’t wait to see Dunkirk!” Jimmy exclaimed, looking up from his laptop.

“Oh, is that about the Miracles at Dunkirk during World War II?” I asked. I don’t know who Christopher Nolan is. “I hope they honor Christ–He certainly intervened in Dunkirk!”

The young men both looked at me.

​”I’m not sure they will, Mom,” Jimmy admitted.

I watched Dunkirk and was so disappointed. Why is God always rewritten out of history?

In May 1940, Hitler launched his blitzkrieg, or lightening attacks, against Belgium, Luxembourg and the Netherlands who surrendered to Germany. German occupation forces moved in to make life miserable for the Belgians, Dutch, and Luxembourgers.

Now, British troops were already in France to help defend France and Belgium. Then the unthinkable occurred with German forces moving rapidly through France, trapping British, French, and Belgian troops on the shores of the English Channel by May 21, 1940.

The war was not looking good for the British.

The German High Command was gleeful. They had the British encircled. Would the war be over so quickly with a decisive German victory?

The only option for the British was to evacuate at Dunkirk. Can you find Dunkirk on the map? It is on the French coast. For some unknown reason, the German troops were ordered to halt on May 22. This halt order gave the trapped soldiers time to build defensive works and get many troops to Dunkirk. This was the first miracle.

By the 24th, German troops were close, surrounding Calais. Hitler planned to have Luftwaffe, German Air Force, fly over the Allies, drop bombs, and destroy them.
​
King George VI called for a National Day of Prayer on May 26. He attended the service at Westminster Abbey with his family. All over Great Britain, people went to church to pray for a miracle. So many people came out to church that there were long lines of people outside Westminster Abbey who could not get in.[i]

On the first day of the evacuation (May 26), there were less than 4,000 men evacuated. On May 28, two days after the National Day of Prayer, a huge storm blew over the entire land area, preventing planes from taking off. The Luftwaffe would not be able to wipe out the British troops. This was the second miracle.

​By June 3, over 300,000 men had been evacuated to England. How did it happen? Of the 800 ships, only 39 were military ships. Hundreds of merchant marine boats, fishing boats, pleasure boats, and lifeboats carried the soldiers across. All kinds of sailors helped out with the mission. This was the fourth miracle.

While the men were waiting for the boats to evacuate them, they were bombarded with machine gun fire and bombs. One chaplain was lying on the sand on the beach as gun fire and bombs exploded. When he finally realized that he was alive and stood up, he saw bullet holes outlining the shape of his body. There had not been a single casualty. This was the fifth miracle.[ii]

Do you see how God intervened? ​The miracles that took place during World War II as direct answers to prayer that allowed Winston Churchill to to call the evacuation at Dunkirk “a miracle of deliverance.”

Here is a taste of this speech:

You can listen to Winston Churchill’s speech here on Youtube.

From this scenario in history, we learn that sometimes God’s miracle is to remove us from a dangerous situation so that we can come back later to fight and win the battle. If you are desperate with your back against the wall–PRAY! Ask God to deliver you! He just might send help in an unexpected way–like little boats across the English Channel!

Oh, I don’t want to forget to tell you about HIS Story of the 20th Century, a living textbook with hands-on learning, living books, timeline fun, and history labs so you can learn 20th Century history decade by decade the fun way!