Celebrate 5 Moms Who Made a Difference 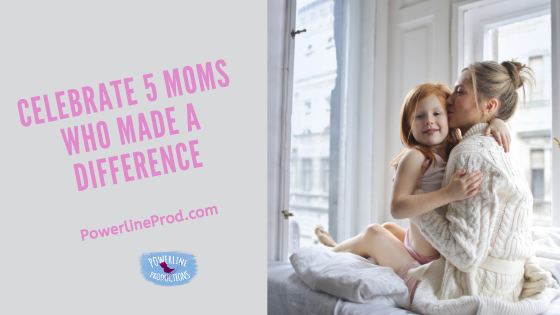 April 29, 2021 in Celebrate, Character Training, Motherhood, Parenting 901
Tell the world what you have found here!

Let’s meet some moms who made a difference by raising children. I love the faith and patient kindness these moms exemplified!

After all, she who rocks the cradle, rules the world!

Thomas exasperated his teachers at school. They labeled him as “dumb” and “lazy”. Mary decided to keep Tom at home and teach him herself. She realized that he learned differently.

Thomas Edison had a heart to serve others which gave him the desire to make life easier for them. He gave the world over 1,000 inventions including the incandescent light bulb, alkaline batteries, phonograph, movie camera, and electricity. Thomas started the Edison Electric Light Company in 1878 to market his products. Merging with another electric company, Edison’s company became known as GE, or General Electric, a company still around today.

Jochebed was a young Jewish wife and mother during a troubled time in Israeli history.

The Jews were slaves in Egypt, crying out to God for deliverance. But things kept getting worse! After Pharoah ordered the killing of all baby boys, Jochebed found herself delivering a fine boy child.

With wisdom and trust in God, she hid her child in the reeds of the Nile River. A royal princess rescued the baby boy, but her quick-thinking daughter offered a nurse—Jochebed. Though she eventually had to give up her youngest son, she was able to spend 4-7 years pouring into him until he was weaned. She taught him about the history of her people and the faithfulness of God.

There was such a beautiful deposit into his life that even after years of luxurious living in the palace, Hebrews 11:24-26 tells us that “By faith Moses, when he was grown up, refused to be called the son of Pharaoh’s daughter, choosing rather to endure ill-treatment with the people of God than to enjoy the passing pleasures of sin, considering the reproach of Christ greater riches than the treasures of Egypt for he was looking to the reward” (NASB).

Moses made some mistakes, but as an old man, he led his people out of Egypt, across the Red Sea, through the desert, to the Promised Land. His sister and brother were at his side! What a beautiful testimony of a mother pouring into the son she would only have for such a short time!

Nelle’s husband Jack turned more and more to alcohol and created many hardships for Nelle and her two sons. One day Ronald had to drag his very drunk father into the house from outside through the snow. They did not have an easy life.

Nelle put her faith in God and made the best of a very difficult life. She brought the boys to church each Sunday and they accompanied her on many of her compassionate ministry outings to mentally insane inmates, people sick in the hospital, or prisoners in jail. She went about doing good and cheered her son on to do great things. Nelle loved to put on drama recitals to share the Gospel, sewing costumes and getting her sons to perform in them.

She even taught Ronald to have compassion on his father, rather than to hate him. Though Nelle and her sons struggled to supplement Jack’s on-again off-again income, she never complained about working hard and her sons helped out financially as soon as they were old enough to do so.

Ronald went on to become an actor, businessman, Governor of California, and President of the United States. He never saw himself as a victim because his mom never saw herself as a victim. Instead, they trusted God and ministered to those less fortunate.

Susannah Wesley raised 10 children (9 more died in infancy) including John Wesley, a famous preacher, and Charles Wesley, who wrote over 1,000 hymns. Susannah was purposeful in raising her children for the glory of God.

She taught her little ones the Lord’s Prayer. She also made sure they prayed each morning and evening before bed. In addition, she led the children in family devotions with Bible reading and singing each morning before breakfast. Sundays were special. Not only did the family go to church, but they participated in lengthy family prayers and Bible study.

Susannah taught her children each day between 9 a.m. and noon where lessons focused on Bible, history, geography, reading, writing, and arithmetic. Each child was taught to read at age 5.

Strict order was maintained with a schedule for naps, schoolwork, meals, play, and bedtime. She rewarded every act of obedience and disciplined willful disobedience followed by loving forgiveness and refusal to bring it up again. She was a stickler for good manners, honesty, and respect for one another’s property.

The home was a place of peace and order where children thrived and grew up in the ways of the Lord. John and Charles, the youngest, went on to found Methodism as the Lord used them to bring revival to England.

Tell the world what you have found here!
Tags: Motherhood, Mothers Day