What You Can Learn About History From Watching TV Shows 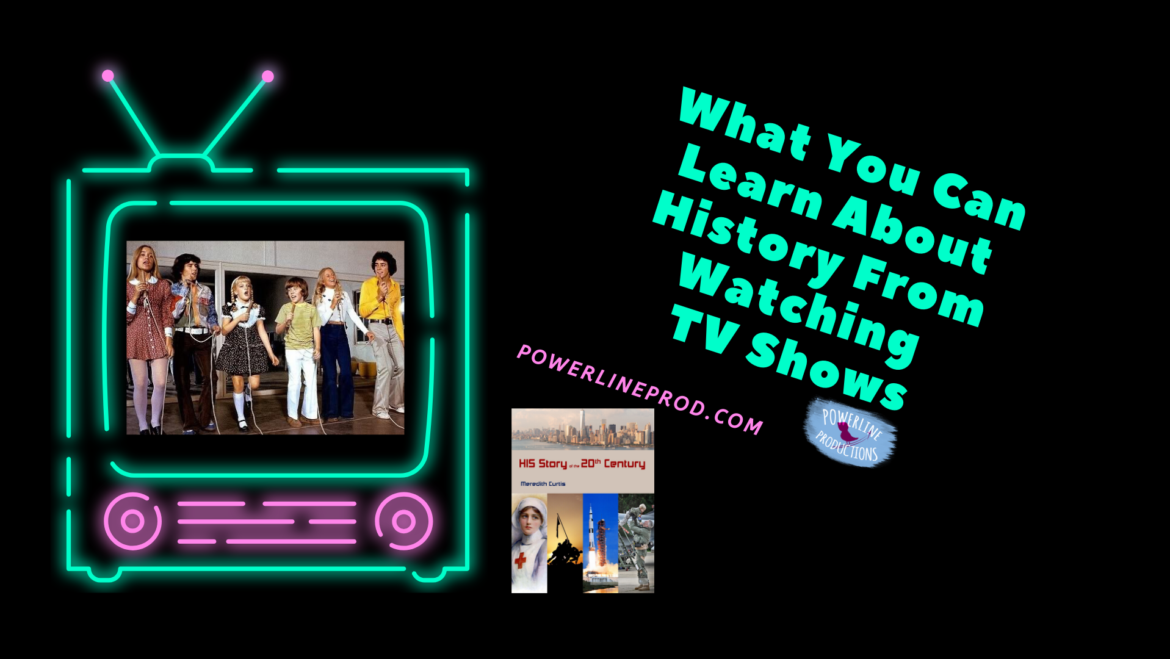 When we first studied HIS Story of the 20th Century in our homeschool co-op, I decided to hold a couch potato marathon. We watched a TV sitcom from each decade 1950s to 1990s. I wanted to show the the fashions, hairstyles, popular slang, and fads from each decade.

Boy, was I in for a surprise! We discovered a lot more about the changes over the second half of the 20th century.

“So what did you notice about the older TV shows compared to the more recent TV shows?” I asked a roomful of homeschool kids when we finished watching 2 TV sitcoms from the 1950s to the 1990s.

I expected to hear about the funny hairstyles, fashion, fas, or furniture. I was surprised when I got my answers.

“They were so polite to each other.”

“Everyone was kind in the older shows.”

“In the latest shows, the people didn’t have good manners.”

I hadn’t realized how much politeness and kindness had disappeared from TV shows, but the children did. Unfortunately, they also began disappearing from our culture during those decades as well. Teaching children manners today is really swimming upstream.

We went on from there to talk about fashion, values, and political statements. I was surprised at how much the kids learned that day about life and how life changed in the second half of the 20th Century.

Here are some things that we learn about history from watching TV shows set in the decade we are learning about:

TV shows give us a glimpse at daily life in a unique way. They reveal where culture was, but also where it was heading since TV has promoted culture since its inception. TV stars were the first to wear bell bottoms, cut their hair in a shag, and wear mini skirts.

The TV show sets reveal architecture and furniture that is popular at the time the show is made. The hair styles and fashion are evident for viewers to observe right away.

Pretend we are learning about the Space Race in history class. I might show an episode of I Dream of Jeannie which is set in Cocoa Beach near Cape Kennedy Space Center. The sitcom ran from 1965-1970. It’s a silly show but there are astronauts, fashions, and made-up situations that are straight from the 1960s. It is a great way to travel back in time to the Space Race.

In addition, values are portrayed in subtle and not-so-subtle ways. Sometimes, the story line cheers on a political issue like feminism (girls can do anything that boys can in Brady Bunch) or cold war (evil Russian spies in Scarecrow and Mrs. King). Sometimes characters share their views openly. In All In The Family, Archie is made to look bigoted and stupid, a slam at conservative working class folks. Anti-war sentiment is openly discussed by Hawkeye and the other characters in MASH.

In some shows, people who live in the country are made out to be buffoons (Green Acres). In the old Get Smart comedy, the Cold War is mocked.

Hollywood has always been far-left when it comes to mainstream values. Perry Mason presented divorce as acceptable when Americans were decidedly against divorce. The media, including television, has played a large part in shifting our values.

When we study 20th Century history, we always have a couch potato day where we start in the 1950s and move through time to the 1990s.

We chose 1-2 comedy sitcoms from each decade, but you could also do this with cops shows, mysteries, dramas, or variety shows.

After each show, we talk briefly about what we liked and didn’t like. We also list the things unique related to the culture of the decade.

For more information on the shows we watched, read my blog, Watch Your Way Through The 20th Century. .

Tell the world what you have found here!
Tags: HIS Story of the 20th Century, Homeschooling, Teach History the Fun Way, TV Shows