My Founding Fathers Hall of Fame 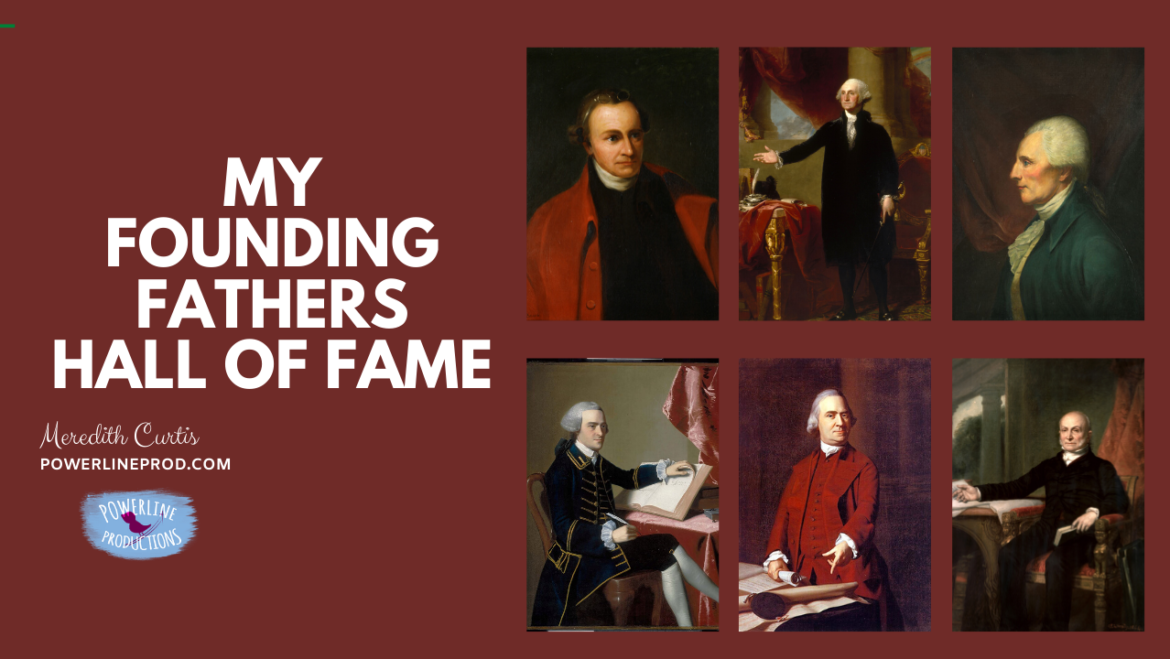 June 14, 2021 in American History, Character Training 2263
Tell the world what you have found here!

If I were to create a Hall of Fame for the heroes of the American Revolution, I would start with my favorite Founding Fathers. I’m so proud of my American heritage and all of our American history heroes!

When I teach history the fun way, I try to travel back in time and meet the people who made history. It is exciting to see that many of our American heroes loved Jesus Christ with all their hearts, minds, souls, and strength.

Let me introduce some of my favorite Founding Fathers to you.

Fiery speaker, governor of Virginia, US representative, father of 17 children, devout follower of Jesus Christ, and Father of the Bill of Rights, Patrick Henry stirred up the hearts of Virginians with his famous “Give Me Liberty or Give Me Death” speech.

Henry served as a US Representative and as governor of Virginia for five terms. Offered positions in both President Washington’s and President Adams’ cabinet, he declined for health reasons.

His famous “Give Me Liberty or Give Me Death” speech is filled with quotes from the Old and New Testament. He read his Bible for hours at a time and urged Americans to flee from the deism and atheism. He loved America and gave his life to her service.

Though George Washington (1732-1799) wanted to be a sea captain, he honored his mom when she asked him not to pursue that career. God honored George for honoring his mom. He went on to become Commander-in-Chief of the Revolutionary Army, preside over the Constitutional Convention, and become the first President of the brand new United States of America. But George always considered himself a farmer and delighted in caring for his beloved Mt. Vernon. He was involved in local politics and government as a land owner, feeling responsibility to help in the decision making process. Moral and reserved, George Washington was always polite and kind to people.

When there were skirmishes with the Indians and French, George Washington was asked to lead men into the wilds of Western Virginia to push the French back. He was a hero in battle. In one battle, he had two horses shot out from underneath him, but he continued fighting until the end. During the Revolutionary War, George was a beloved commander and both enlisted men and officers were devoted to him. He led his troops through very hard times, including near starvation at Valley Forge. George Washington served as President of the Constitutional Convention and was elected the first President of the United States. He took his oath of office in the nation’s first capital, New York. The capital was moved to Philadelphia in 1791 and to Washington D. C. in 1801. A man who valued relationships, he was able to lead a group of very different men to work together to achieve a common goal. He is a true American hero!

John Hancock was minding his own business as a wealthy merchant in Boston until Sam Adams got a hold of him. Samuel Adams envisioned John for the cause of liberty and they became “Sons of Liberty.” One of their first escapades was to plan and execute the Boston Tea Party.

John Hancock served in the First Continental Congress and was elected President of the Second Continental Congress. He is often remembered for his beautiful flourish at the bottom of the Declaration of Independence–his is the largest signature on the document. “There! I guess King George can read that without his spectacles!” he is reported to have declared as he added his signature to the document.

John Hancock served as governor of Massachusetts nine terms. He shared Patrick Henry and Richard Henry Lee’s concern about the Constitution. Throughout his lifetime, John Hancock was a generous man and people admired him for his kindness.

I love this quote from him: “Resistance to tyranny becomes the Christian and social duty of each individual…Continue steadfast, and with a proper sense of your dependence on God, nobly defend those rights which Heaven gave, and no man ought to take from us.

A rabble-rouser and instigator of trouble for his enemies, Samuel Adams had strong opinions about liberty and shared them boldly. He founded the Sons of Liberty and Boston’s Committee of Correspondence. He helped plan the Boston Tea Party, as well as stockpile weapons for future use by the Continental Army.

Samuel Adams served in the First Continental Congress, signed the Declaration of Independence, and helped to draft the Articles of Confederation. He served as the President of the Massachusetts Senate, Lt. Governor, and Governor.

Wherever he went, Samuel stirred up controversy and fought for liberty. He was a character! But underneath it all, he trusted in the finished work of Christ. This is what he wrote in his Last Will and Testament: “Principally, and first of all, I resign my soul to the Almighty Being who gave it and my body I commit to the dust, relying on the merits of Jesus Christ for the pardon of my sins.”

John Quincy Adams served his father during the American Revolution. Born in 1767, he watched the Battle of Bunker Hill from his family farm. He traveled all over the world with his father, John Adams, serving at his side. You could say that he grew up in public service.

At the age of 14, Congress appointed the young man to serve as secretary to the Ambassador to Russia. At age 26, he was appointed Minister to the Netherlands. He was elected as a Senator at the age of 35. He served as Secretary of State under President James Monroe, negotiating the acquisition of Florida and helping to formulate the Monroe Doctrine. He served as President of the United States from 1825 to 1829. When he was not re-elected President, he ran for United States Congress and served as a Representative for the rest of his life. His life was truly spent in public service.

What I like best about him, though, is that he loved Jesus and valued His Word. He was a member of the American Bible society, expressed his faith openly, and even wrote a hymn. Every day he read two-five chapters in the Bible in the original Hebrew and Greek. He spoke out strongly for the divinity of Christ, urging those flirting with that false doctrine, to lay it aside. He closed his inaugural address on March 4, 1825 with these words, “Knowing that ‘unless the Lord keep the city, the watchmen waketh but in vain, with fervent supplications for his favor, to His overruling Providence I commit, with humble, but fearless, confidence in my own fate, and the future destinies of my country.”

I hope I have whetted your appetite to learn more about our Founding Fathers and the rich heritage we have as Americans.

Another American statesman from Virginia, Richard Henry Lee was the one who stood up in the Second Continental Congress and declared, “Resolved: that these united colonies are, and of right ought to be, free and independent states, that they are absolved from all allegiance to the British crown; that all political connection between them and the State of Great Britain is, and ought to be, dissolved.”

In other words, Richard Henry Lee is the one who stood up and said, “Hey, let’s be free from Great Britain!”

Richard Henry Lee served in the First and Second Continental Congresses, served in the Virginia House of Burgesses, and was elected as President of Congress in 1783–that’s right, he was the first President in the United States of America before the Constitution was ratified. Like Patrick Henry, he had concerns about the Constitution, but once it was ratified, he championed the Bill of Rights. He was elected as the first United States Senator from Virginia. Richard Henry Lee spent his life serving his state and country, working tirelessly for freedom through legal channels.

Learn About American History Through Art

From the Age of Exploration to Recent Times, this kid-friendly and teen-friendly art appreciation course brings historical events and people to life! We have chosen artists who have been enjoyed for decades and centuries by Americans from all walks of life. Some of these artists painted portraits of famous Americans, others painted historical scenes, a few painted America’s beautiful natural landscapes, and all of them give us a glimpse of American life!

Learn About American History In The Kitchen

We love to learn in the kitchen! It’s so fun to learn about different time periods in American History and then eat what they ate. We’ve adapted historical recipes to make them easy to fix in your own kitchen. Let your chefs learn history the fun way–in the kitchen!

Learn About American History with A Timeline

The creation of your very own American history timeline will cement dates, people, and events in everyone’s minds and give a bird’s eye view of history to the whole family.  Timelines are a great way to add hands-on fun to your history class. In our house, we work on our timelines while we watch an historical movie set in the time period we are working on.

I just love the literature in this course–it’s such a fun mix of authors and genres. Enjoy Davy Crocket’s homespun wisdom and Mark Twain’s silliness. And read the book everyone talks about, but no one reads–Uncle Tom’s Cabin–you will love this book! Discover hearts dedicated to the Lord in unexpected places as you get a bird’s eye view of American history along the way.

Students will learn to work with original documents from the Age of Reason, summarize, paraphrase, create a thesis, and walk through the research process step-by-step. Use American Literature & Research, a one-credit high school English course, at home or in a homeschool co-op setting.