Homeschooling Wisdom for Television and the Internet 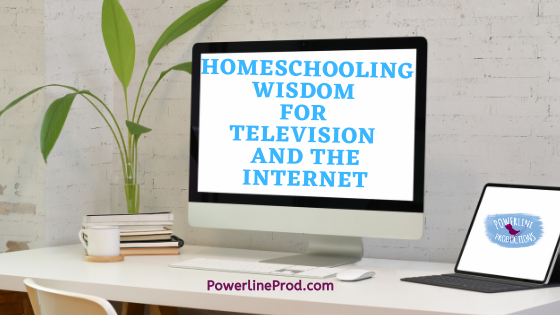 24 days ago in Character Training, Homeschooling, Life SKills, Lifestyle of Learning 140
Tell the world what you have found here!

Though we did not watch TV in our home, three of my children watched television shows on the internet without me even knowing about it. They Disney shows full of disrespect to parents and rebellion against authority. I was heartbroken when I found out. And it did bear bad fruit in their lives that had to be gotten rid of.

The internet felt like a big monster that was ready to gobble my children up.

Even my children that didn’t watch anything I didn’t want them to, ended up playing games online and researching with google instead of books.

Now, don’t get me wrong.

The internet is amazing. It is definitely a tool to take the Gospel to the ends of the earth. I would much rather have a planning meeting on Zoom than in person. I love connecting with friends from all over the world that I never see in person.

I do believe the internet can be used responsibly.

Here are some things I have learned and imparted to my children.

Hanging Out with Television Characters

When my children got really into the television show Psych, I sat down and talk to them about Shawn and his complete laziness and selfishness. I asked them if they would like having him for a friend? Son? Father?

Why did I do this?

Yes, I laugh at Psych, but after a few episodes, I am troubled by character traits that I don’t want to see in our children.

My children need to understand this principle: We become like those we hang out with—that includes characters on TV.

Proverbs 13: 20 says, “He who walks with the wise grows wise, but a companion of fools suffers harm.”

One thing I have done is buy old television shows from a more wholesome time in history for my kids to watch.

In the early years of my parenting, I limited screen time to 30 minutes a day because I realized that time in front of the television (or other screen) affects their attention span.

I wanted the kids to read, draw, paint, create, play music, and play outside. I didn’t want them to waste hours in front of a phone, TV, computer, or tablet.

My younger children watched a lot more TV in the younger years than my oldest ones and the fruit is evident. My older children have longer attention spans.

Yet, it’s never too late to lengthen attention spans. Limit TV now and watch the impact it has on your kids being able to concentrate.

Created To Be Addictive

Do you ever find yourself to be scrolling through Instagram and suddenly you realize you’ve been on it for an hour! Yikes!

So much online is created to be addictive. It is fast-paced and colorful to grab your attention. Words are bullets that you glance over and move on. You find yourself saying, “What else is here? Is it better? I have to find out!”

If the internet was a mall with 10,000 stores in it. 9,900 of those stores would be pornographic or sexual in nature. The internet sells sex. It is a haven and stomping ground for sexual predators and sex traffickers.

I cannot tell you how many young teenagers I have counseled who thought they were friends with another teen, and it turned out to be a middle-aged sexual predator. These predators and adroit at getting youngsters to take off their clothes for them online or send pictures of themselves in undergarments or completely naked.

Children should never be online unsupervised!

Again, I listened to heartbreaking stories of teens who are addicted to pornography. The addiction often started with sexual curiosity. Instead of talking to their parents, they googled the word “naked” or something similar. Once you look at pornography, you receive a rash of “invitations” to see more.

For more on the problems with pornography, listen to my podcast:

We have chosen to keep all computers, laptops, and televisions out in the open and never behind closed doors. Our screens are in the homeschool room and family room.

We regularly discuss our children internet use without condemnation, but helping them to walk in integrity and purity before the Lord.

We also have Covenant Eyes on our computers and laptops.

Google Has a Political Agenda

If we want our children to hear both sides of a political or more issue, we need to realize that Google brings up articles and websites that lean far left.

If children use Google to research they will encounter history websites with revisionist history and science sites that teach evolution. If they look up a current event issue, they will be directed posts and sites that give the far-left perspective.

Here are some Conservative news sites:

For science information from a Creation perspective:

Our children and teens need to understand these things so they can take initiative themselves to stay safe and have a balanced approach to research.

So, homeschooling parents teach your kids the why behind internet safety!

We live in a world where we must use the internet. We can use it safely, but we need to not just protect our children but share these truths and envision them to take part in protecting themselves.

Tell the world what you have found here!
Tags: Internet Safety, Internet Wisdom