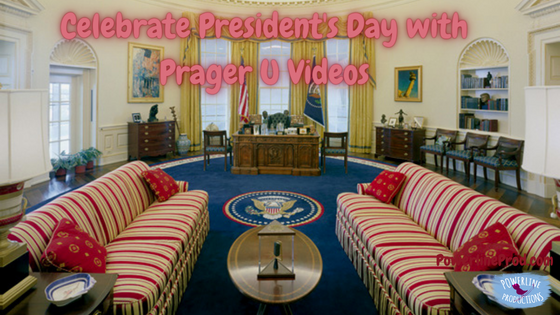 8 days ago in American History, Family Fun, Homeschool Resources, Homeschooling 96
Tell the world what you have found here!

President’s Day is a great time to learn about the amazing line up of men who have served our country since its founding. From Washington to Lincoln to Coolidge to Reagan to Trump, we have seen strong men who stood up for freedom and the American dream. We have been so blessed as a nation.

My children love videos and we especially enjoy Prager U videos. They are full of good information and easy to understand. Plus I love the conservative perspective – that’s hard to find these days.

YouTube description: The first five presidents of the United States are known as the Founding presidents: Washington, Adams, Jefferson, Madison, and Monroe. Who were they? What made them exceptional? And why are their stories so relevant to us today?

What Made George Washington Great?

YouTube description: There would have never been a United States of America without George Washington. John Rhodehamel, author of “George Washington: The Wonder of the Age,” details how Washington successfully guided the budding nation through war and nurtured her in peace.

George Washington: A General Without an Army

YouTube description:“The man to whom the country is most indebted for the great measure of independence is Mr. John Adams.” That was from a delegate to the Continental Congress. But how much do you know about this influential thinker and second president of the United States? Brad Thompson, Professor of Political Science at Clemson University, tells Adams’ remarkable story.

The Genius of Thomas Jefferson

YouTube description: Abraham Lincoln admired him. So did Franklin Roosevelt. So did John F. Kennedy. Dozens of other presidents expressed similar sentiments. They were talking about Thomas Jefferson, America’s third president. Carol Swain explores why their praise was so well deserved.

YouTube description: From the day he joined the Continental Congress in 1780 through his second term as the fourth President of the United States, James Madison was in the middle of everything. Many patriots contributed to the country’s success, but few, if any, did as much as James Madison. Historian Jay Cost explains.

YouTube Description: America’s fifth president James Monroe, the last of America’s Founding Fathers, is also the least well known. But that doesn’t mean he wasn’t a giant among giants. He was. Author Chris DeRose tells his story.

YouTube description: Guess or Mess is a wild and fun quiz show that features trivia and total mayhem as kids compete to answer questions from our PragerU Kids magazines. Read the magazines and guess along at home (mess optional!)

YouTube description: Warren Harding is not regarded as one of our most successful presidents. He’s more likely to be remembered for his scandals than his accomplishments. But given the problems he had to confront — massive war debt, high unemployment, and skyrocketing inflation — is this harsh appraisal fair? Renowned historian Amity Shlaes takes a fresh look at our 29th president.

YouTube description: Americans today place enormous pressure on presidents to do “something” when there is a national crisis. But our 30th president Calvin Coolidge did “nothing” …other than shrink the government. The result? America’s economy boomed. Is there a lesson to be learned? Renowned historian Amity Shlaes thinks there is.

YouTube description: In this lively game show (based on PragerU Kids digital magazines), our kid contestants test their knowledge and learn about how Calvin Coolidge, a shy boy from Vermont, became one of America’s most popular presidents. Who will guess correctly and who will get a pie in the face? Watch!

YouTube description: Herbert Hoover, the 31st President of the United States, succeeded at almost everything he did. Yet he is best remembered for one failure: the Great Depression. Is that legacy justified? Historian Kenneth Whyte examines the evidence.

YouTube description: Few presidents have connected with the American people like Ronald Reagan did. Through a combination of persuasion and policy, our 40th president turned a depressed nation into a confident one. Scott Walker, former governor of Wisconsin and president of Young America’s Foundation, explains how he did it.

Do your kids know all the Presidents? How about the First Ladies. These notebooking pages are a great way to get kids to read and research and notebook. Grab your copies at PowerlineProd.com

Have fun this President’s Day and every day as you enjoy the wonderful privilege of educating your kids at home.

Tell the world what you have found here!
Tags: Prager U Videos