3 Ways Your Children Will Be Inspired By St. Patrick

HomePowerline Productions BlogCelebrate3 Ways Your Children Will Be Inspired By St... 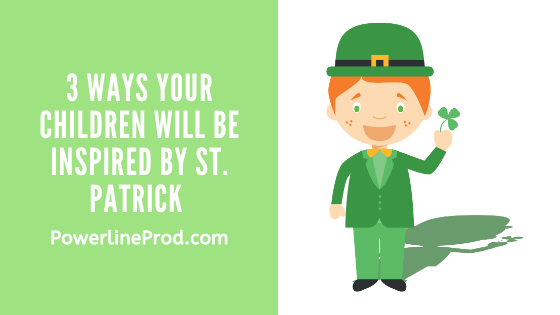 Who is St. Patrick?

Isn’t he an Irish priest?

Or is he a leprechaun?

Is he a legend or a real person?

Did he drive all the snakes out of Ireland?

St. Patrick is an English missionary and Apostle to the nation of Ireland. Captured by Irish pirates as a young boy, St. Patrick is a Christian hero that your children should meet.

In a day when most of our “super-heroes” and icons lack integrity, it is good to learn about a true hero, brave in every situation.

Patrick was born in England during Roman Times. Though his father was a priest in the Celtic Church, Patrick spent his time partying in the Roman colony seaside village. Patrick did not want to serve God like his parents did. It took a disaster to bring him to the Lord.

One day, Irish pirates stormed Patrick’s seaside village, killing many of the inhabitants. At the young age of fourteen, he was kidnapped, taken as a slave to Ireland, and forced to work as a shepherd. Ireland was a land of pagans and Druids who worshiped idols. Patrick was very homesick.

During his captivity, he remembered his parent’s faith in God and surrendered his life to Jesus as Lord and Savior. He grew closer to the Lord during these years and did his best to be a shining light for His Messiah.

My children are inspired by how he turned to God instead of wallowing in self-pity. I am reminded that what we sow into our children’s hearts will always be there.

One night, God spoke to Patrick in a dream to go to the coast so he could leave Ireland. Patrick waited on the Lord for the right timing. Finally, an opportunity came for Patrick to make his escape. Making his way to a port city, he boarded a ship bound for freedom. Sailors, who took pity on him, smuggled him aboard a ship sailing for England. To his great joy, Patrick was reunited with his family.

Called To The Irish

Happy to be home, Patrick had another dream. In this dream, the people of Ireland were begging him to come back to Ireland. His heart was moved with compassion for those poor Irishmen and women who would die in their sins. A burden to share the Gospel with the Irish began to beat in his heart.

Now his training for the priesthood and his call as a missionary to Ireland began. Patrick spent almost twenty years in preparation.

Patrick was treated terribly by the Irish, yet he had compassion on them and wanted them to know Jesus. What an inspiration! Also, he didn’t rush back. He waited, prayed, and received training before he headed back to the land of his captivity.

Patrick arrived in Ireland as a priest of Jesus Christ, making it his ambition to convert the entire island to Christianity. St. Patrick moved in incredible signs and wonders. There were several “power encounters” with druid priests. God always won! Many chieftains and their families were converted to Christianity, abandoning their idols to serve the True and Living God.

The first power encounter Patrick had was in Tara, where many kings, chiefs, and Druid priests were celebrating Beltine, a pagan festival. This evil celebration happened to coincide with Easter that year, so Patrick resolutely decided to take a stand. While the pagans celebrated inside a castle, Patrick set up camp to celebrate the Resurrection of Jesus in full view of the castle.

There was a law of the land that on the eve of the festival, the high king would light a giant bonfire FIRST. If anyone dared to light a bonfire before the high king lit his, that person would be put to death. Patrick boldly lit his own bonfire first.

Outraged, the high king summoned Patrick. The king’s companions, Druid priests began to mock the Christian faith with dirty language and vicious threats. A holy boldness came over Patrick, who confronted the priests fearlessly with God’s Word. The first priest was hurled into the air and smashed to the ground by an “unseen force.”

The king was furious and yelled, “Seize him!”

In response to his cry, darkness fell, the ground shook, and confusion reigned. Soldiers of the king began to attack one another, while frightened horses smashed chariots to get away. The terrified king knelt down and surrendered his life to Christ.

Patrick lived true to his vow of poverty and traveled throughout the island for forty years of productive ministry. Many of his disciples became famous theologians and enjoyed fruitful labor in the Kingdom of God.

He used the shamrock to explain the Trinity, which is why it is associated with St. Patrick’s Day. Humble and godly, St. Patrick changed the course of an entire nation. Today, the whole world celebrates this apostle to the Emerald Isle.

His entire ministry was an inspiration. From his bold faith to his gentle humility, he is a true hero in every sense of the word!

Have fun introducing your children to a true Christian hero!