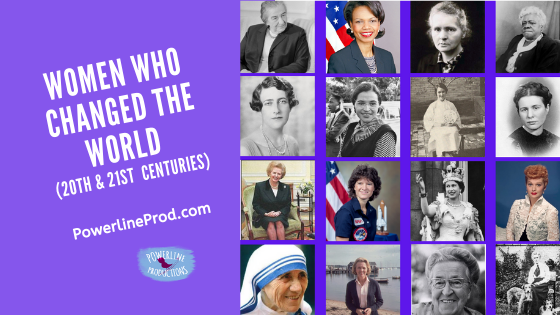 Let’s meet some women who impacted the world in a lasting way. These women are unique pioneers, heroes, or leaders.

Though this list of women is far from exhaustive, it gives a glimpse of how one life can change many. I hope it sparks an interest to discover even more of the amazing ladies from the last 120 years that have truly made a difference.

You will meet a scientist, nurses, missionaries, writers, national leaders, teachers, businesswomen, an astronaut, a nun, and a watchmaker.

With her husband Pierre, Marie Curie (1867-1934) discovered 2 elements: radium and polonium. They coined the term “radioactivity” and ushered in the atomic age. Marie was one of the first to suggest using radiation to treat cancer. She won a Nobel Prize in physics and in chemistry.

Edith Cavell (1865-1915) was serving as a British nurse in Belgium during World War I when the Germans arrived and ruthlessly destroyed the country. She and her fellow nurses helped 200 Allied soldiers escape from Belgium during the German occupation. Unfortunately, she was arrested and killed by firing squad. In making her peace with God before she died, she was determined to leave this world with no bitterness in her soul.

The first woman to hold national office in the United States was Jeanette Rankin (1880-1973), A Republican from Montana, she was elected to the United States House of Representatives. She worked tirelessly to ban child labor and improve the welfare of women and children.

Dame Agatha Christie Mallowan (1890-1976) is one of the best-selling authors of all time. She is remembered for popularizing the cozy mystery genre with her 66 novels and 14 short story collections particularly those with detectives Hercule Poirot and Miss Marple. Agatha Christie is considered the Queen of Mysteries.

The daughter of former slaves, Dr. Mary McLeod Bethune (1875-1955) was a Christian teacher who eventually found herself in Palatka, Florida starting a school for young women. The school flourished! In 1931, the Methodist Church helped her school combine with a nearby men’s school. “Mama Bethune” became the new president of Bethune-Cookman College. Soon another door opened for Mary and she became the first African American women to head up a federal agency, the Federal Council of Negro Affairs, an advisory board to President Franklin Roosevelt and his cabinet.

British Missionary Gladys Aylward (1902-1970) went from parlor maid to hero when she traveled by faith to China to serve an older missionary woman. In 1932, a Mandarin official hired her as a ‘foot inspector’ and she helped eradicate the crippling custom of binding women’s feet. In 1940, Gladys led 100 orphans to safety across the mountains to escape the Japanese who were invading China. When Communist took over China she fled with freedom-loving Chinese to Taiwan living out her days with her beloved Chinese people.

Cornelia Arnold Johanna “Corrie” ten Boom (1892-1983) hid Jews from the Nazis during World War II. In 1844, Corrie’s grandfather, Willem was approached by a Messianic Jewish pastor who asked Willem to start a weekly prayer meeting for the Jewish people. 100 years later, Corrie along with her father and sister were arrested and sent to a concentration camp for hiding Jews in a secret room upstairs. The only one to survive the camps, Corrie shared her testimony of God’s faithfulness and forgiveness all around the world after her release.

Irene Sendler (1910-2008), a devout Roman Catholic nurse, rescued 2,500 Jewish children from the Warsaw Ghetto in Poland. She was able to get in and out of the walled ghetto became of her job as a social worker claiming she was “inspecting for disease.” Rescued children were housed by Christian families who provided them with papers and a new name. The creator of a small, secret underground rescue movement, she was eventually caught, tortured, and scheduled to be executed. Friends bribed the executioners and rescued her.

Born in Kiev and raised in the United States, Golda Meir (1898-1978) and her husband moved to Palestine right after World War I in 1920 to work on a kibbutz. She served in government under the British and played an important role in the Israel becoming a nation again. In 1969, she was elected the first woman Prime Minister of Israel.

Elizabeth Alexandra Mary Windsor (1926- ) life changed when her father ascended the throne after his brother King Edward VIII abdicated. She married Prince Phillip in 1947 but her father’s death cut short his career and any kind of normal life. Since 1952. Elizabeth II has ruled over the United Kingdom and the Commonwealth of Nations with a steady hand and faith in God. She is the longest reigning monarch in British history and enjoys the unwavering support of her people.

Early one evening in Montgomery, Alabama, Rosa Parks (1913-2005) made history when she refused to give up her seat on the bus to a white man. This incident in 1955 led to the Montgomery Bus Boycott, an important event in the civil rights movement. She and her husband were active in the NAACP and Civil Rights Movement before and after this historic moment.

When her husband died after attempting to make friendly contact with the fierce Auca tribe in Ecuador, Elisabeth Eliot (1926-2015) and her baby daughter chose to forgive. They shared the Gospel with the men who killed her husband and led them to Christ. Elisabeth, the daughter of missionaries, became a popular speaker and author who encouraged many young people to go to the mission field.

German immigrant Lillian Hochberg (1927-2015) started a mail-order business in 1951 in her apartment in Mount Vernon, New York. The company “Lillian Vernon” offered gifts and gadgets that appealed to women and became an instant success. Lillian’s company was the first female-founded company to be publicly traded on the American Stock Exchange.

A pioneer in comedy, hilarious actress Lucille Desiree Ball (1911-1989) met and married Desi Arnaz in 1941. They produced a show together called I Love Lucy premiering in 1951 as well as starting a production company that produced more hit shows like The Dick Van Dyke Show and Star Trek. When they divorced, Desi sold his portion to Lucille making her the first woman to own a major studio. Lucille started filming in front of a live audience and using 3 cameras instead of just 1. She also continued to act starring in more hit shows like The Lucy Show and Here’s Lucy.

Founder of the Missionaries of Charity, Mother Teresa (1910-1997) was an Albanian-Indian Roman Catholic nun and missionary who devoted her life to caring for the destitute and dying in Calcutta, India. She won the Nobel Peace Prize in 1979 for her devotion to the poor and sick. Along with members of Missionaries of Charity, Mother Teresa took a vow of chastity, poverty, obedience, and wholehearted service to the poorest of the poor.

Born to missionary parents in Qingjiang, China Ruth McCue Bell Graham (1920-2007) met her husband Evangelist Billy Graham at Wheaton College. God blessed the Grahams with 5 children but raising them fell mostly on Ruth because Billy was traveling all over the world preaching the Gospel in large crusades. As her children grew up, she began writing and authored many books on Christian living.

Concerned with growing apathy with Christianity in young people, Edith Schaeffer (1914-2013) and her husband Francis traveled to Switzerland to found L’Abri. In the path of young hippies returning from their travels to Eastern Europe, the couple invited them into their home for hospitality and intellectual discussions about Jesus Christ. Many were saved. As the children grew up, Edith began to write books about homemaking, art, and theology impacting Christian women across the world.

Baroness Margaret Hilda Thatcher (1925-2013) led the Conservative Party in the United Kingdom from 1975 to 1990, serving as Prime minister during the 1980s. She worked closely with President Reagan to rid the world of Communism. She was England’s first woman Prime Minister, but more important she revived the economy and spirit of her nation.

Sandra Day O’Connor (1930- ) was nominated by President Reagan to the Supreme Court and confirmed by the U.S. Senate. She served as the first woman associate justice on the Supreme Court from 1981 to 2006 when she retired to care for her husband who was dying of cancer. She was a moderate Republican before her nomination and tended to vote with the Conservative bloc on the court.

Astronaut and physicist Sally Kristen Ride (1951-2012) became the first American women in space in 1983 on the Space Shuttle Challenger. Her second flight a year later was also on the Challenger. Later in life she wrote several books on space for children.

After getting a PhD in political science, Condoleezza Rice (1954- ), she enjoyed success as a professor at Stanford University. She was selected as Provost and led the university out of a financial deficit. She was the first African American women to serve as National Security Advisor (2000) and Secretary of State (2004) under President George W. Bush. Today, Dr. Rice is back to teaching and heads up the Hoover Institute, a public policy research center promoting the principles of individual, economic, and political freedom.

God has always used women in His plan and purposes. Some women reject Him and work to extend the Kingdom of Darkness instead. Other women kick in the gates of hell to rescue captives and extend the Kingdom of Light! However, ALL women have one thing in common. Jesus loves them enough to offer eternal life to all who will believe in His Name.

Tell the world what you have found here!
Tags: Ladies, Women, Women's History