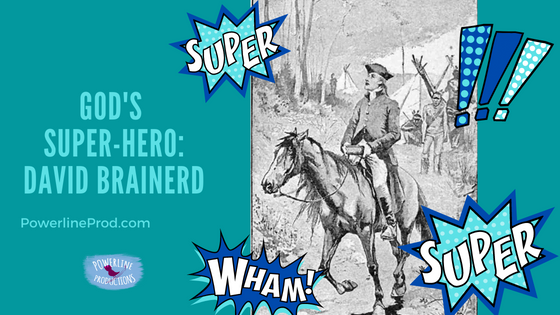 Emotional. Passionate for Jesus. Struggling with sickness his entire life. David Brainerd is a young man out teens can relate with. He’s so transparent.

Let me show you this remarkable young man with a glimpse into his life.

David makes his way through the dense forests to visit the Delaware tribe. He sees the smoke of their campfires and decides to camp out in the woods until the morning. He builds a fire and sets up camp. Delaware spies decide to kill him, so they hide out all around him waiting for a good moment to strike. The young man, unaware of the spies, kneels to pray. While he is engaged in earnest intercession, a rattlesnake slithers up and rises up to strike. Suddenly, for no apparent reason, the snake glides away. The spies are dumbfounded and head back home. The next day, David arrives, preaches the Gospel to the Delaware tribe, and wins many converts to Christ.

David Brainerd (1718-1747) was born into a Christian home on the banks of the Connecticut River. He lost both parents by his fourteenth birthday. By that age, David was desperately seeking God with serious Bible study, prayer, and fasting. At the age of twenty-one, David headed to Yale University, but during the cold winter he caught measles and then one illness after the other, including tuberculosis. Returning to Yale after a year of sickness, revival was in the air on campus after a visit from George Whitfield. Sermons on reaching the Native Americans touched David’s heart deeply. At the age of twenty-three, he surrendered his life fully to God’s service, whatever that would be.

As the Great Awakening flowed through all thirteen colonies, David preached to colonists and Native Americans. Yet his heart ached to preach where Christ was not yet known. He trekked through the Northeastern American wilderness, preaching to several different tribes. It was a hard life, and he was not a healthy man. Eventually, his health gave way. He was nursed during the end of his life by his fiancé, Jerusha, in the home of Jonathan Edwards, her father. Also devoted to Jesus wholeheartedly and exhausted from caring for David, Jersusha fell sick a few months later and never recovered. She joined her fiancé in Heaven.

Jonathan Edwards gathered David’s journal and other writings, compiling them into a book that has been read by Christians through the ages in 1749. This was the first complete missionary biography to be published. David’s short life story influenced William Carey, missionary to India, as well as Henry Martyn to head to Indian and Persia. Jim Elliot, missionary and martyr to a cannibalistic tribe in Ecuador, was inspired and influenced by David’s journal as well!

What a precious brother in the Lord. Your teens can read David’s diary in our one-credit American Literature & Research high school class. This is just one of the remarkable books students enjoy as they read their way through American history. In addition, they learn to work with original documents, write paraphrases, write summaries, craft thesis statements, and write a research paper step-by-step.