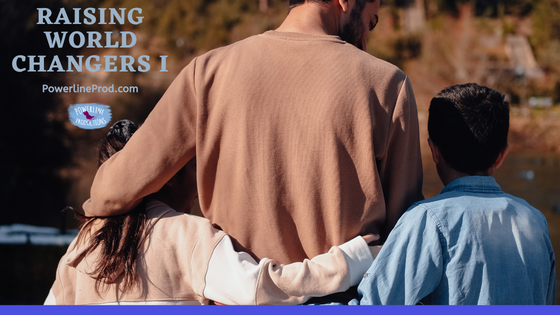 August 10, 2022 in Bible, Character Training, Christian Living, Parenting 280
Tell the world what you have found here!

At age 10 with a backpack slung across her shoulders, my oldest daughter, Kate, was heading out the front door. “Hey, Hon, where are you heading?” I asked. I thought to myself, “Great! She’s already wanting to move out. What’d I do this time?”

Her response caught me emotionally, “Going to Jillian’s to disciple her.” She excitedly opened her backpack to reveal her Bible storybook, cookies for refreshments and enough Popsicle sticks to build Noah’s ark.

I wasn’t sure if I should laugh or cry. She has always had an amazing heart for Jesus and people, even at 10. She has served in our teen ministry, L.I.F.E. Groups and drama outreach. She has also discipled numerous young ladies. Can you say, “world changer”?

Allow me to start by defining this term, “world changer.” It is someone who is radically devoted to and passionately pursuing Jesus Christ, compassionate toward people, and willing to risk everything for the sake of Christ’s kingdom.

So, how do we raise these fiery fighters? I can assure you it is not accidental. It is intentional. It requires sacrifice and plenty of it. But before we explore the answer to this question, let me say this: We cannot pass on what we ourselves do not possess. We cannot raise world changers if we ourselves are not seeking to change the world. If this is your heart, then God will do the changing!

We Recreate Who We Are

The Bible tells us in 2 Samuel 21:15-22 that David’s mighty men defeated four giants like Goliath in separate battles that demonstrated their skill and valor: “Now these four were born to the giant in Gath, and they fell by the hand of David and by the hand of his servants” (v. 22). It is noteworthy that David’s brother Shimea, who served in Saul’s army, never managed to kill one of these huge, burly Philistine warriors, but Jonathan, his son who fought alongside David, is mentioned in verse 21 for his heroics in taking one down.

So, let’s do some math. Between David and his mighty warriors, they slew five giants. And how many did Saul and his men kill? Zippo. Zero. Nada. Why? Because you cannot pass on what you yourself do not have. It’s simple math, or should I say, spiritual legacy. David’s legacy as a giant slayer was passed on to his men. Saul could not do this.

We must assess with honesty our devotion to Christ and His kingdom. Are we allowing God to build in us what we desire to build into our children? If not, we must first ask our King to break through our religious external and thoroughly win our heart, train our hands for war (Ps. 144:1), and grant us a radical devotion to His purposes to slay some giants in the land.

Just as David had to draw five smooth stones from the creek bed to prepare for his battle with Goliath, so you must cultivate certain intentional habits to raise world changers. Be sure to check out Part 2, in which I discuss the five “stones” you need in order to pass on a powerful spiritual legacy.

Tell the world what you have found here!
Tags: Childraising, World Changers

Mike Curtis, pastor of Powerline Community, homeschooling Dad, and proud Grandpa, has a passion for making disciples and raising world changers in this generation. He is the author of The Noland Kids Adventure Series and The Making of Real Men, a discipleship manual for mentoring young men. Mike is married to his college sweetheart, Meredith. Visit him at Mike Curtis – Powerline Productions.