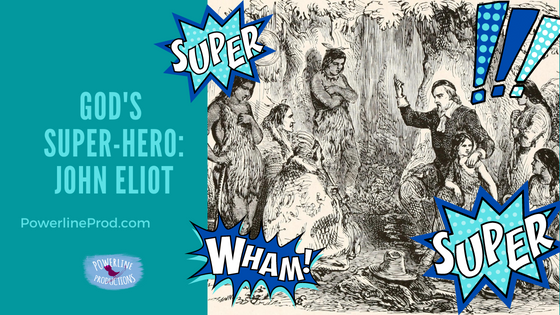 John Eliot was born on farm in England in 1604.

“I want to be a pastor when I grow up,” he told his father.

“Then you must go to school, John,” his father replied.

So, John went to Jesus College at Cambridge. Soon he got a job as an assistant pastor in Little Baddow, Chelmsford in England. The senior pastor was Rev. Thomas Hooker who was a strong Puritan. A Puritan is someone who wanted to purify the Church of England and help it to return to the ways of the Bible. While John helped Thomas pastor the church, Thomas mentored John. He helped John to grow stronger in the Lord.

In those days, the king did not like Puritans calling for reform in the Church of England so he fined them, jailed them, and sometimes took away all their land and property. Thomas had to flee to Holland for safety. Later, he moved to Massachusetts and helped to found the colony of Connecticut. Rev. Thomas Hooker was a founding father of Hartford, Connecticut.

A few years later, John followed his mentor over to America. John arrived in America in 1631.

After John traveled to Massachusetts, he preached at the Church of Roxbury and married Hannah Mulford

“I want to reach the Indians in America who don’t know Jesus,” John said to his wife, Hannah.

John and Hannah were passionate to reach the lost Indians and welcomed a young Native American into their home. This young man taught them several tribal dialects. John translated the Ten Commandments and the Lord’s Prayer into the man’s own tongue. In 1646, John began preaching to Native Americans at Newton. Wow! These men and women could hear preaching in their own language!

John managed to get land set aside where homes, a church, and a school were built for the Indians. John preached at Natick once every two weeks for the rest of his life.

In 1649, the English Parliament recognized the “Society for the Propagation of the Gospel in New England” which provided financial support for John’s missionary work among the tribes. By 1674, the number of “praying Indians,” or Native American believers in Jesus, was close to four thousand.

The most important thing that John did was to translate the Scripture into the Native American language. First he translated and printed the Catechism, followed by the New Testament and Old Testament. It was not easy. You see, the Algonquin Indians did not have an alphabet, but rather a set of pictures that stood for words. He learned their language and they learned the phonetic alphabet (A, B, C, D, ….). He used this alphabet to translate the Scriptures. He also wrote and printed an Indian Grammar, an Indian Primer, and Indian Dialogues. This was a family project. His sons helped him with his work.

John Eliot is just one of the many Christians heroes we can celebrate!

John Eliot and other men and women of God were used by the Lord to change the world. God has a plan for you, too, and your family! Inspire them with Christian heroes!

In addition, there are monologues/dialogues for over 40 Christian heroes with costumes suggestions and game ideas for the Heroes for Jesus Party.

For His Glory,
Meredith Curtis ​

Tell the world what you have found here!