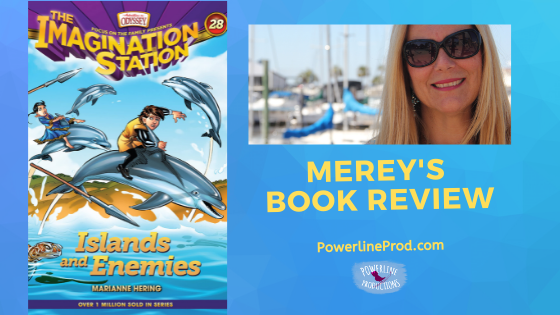 Disclosure: I received this complimentary product through the Homeschool Review Crew.

All the Christ-honoring stories from Imagination Station teach a moral lesson in a subtle way, but that’s not the only reason kids love them. Islands and Enemies by Mariann Hering from Tyndale gives children likeable characters to cheer on and an adventure to keep them on the edge of their seat for the entire book.

The plot is exciting, the history accurate, and, like the rest of the Imagination Station series, the books are wholesome. While history is being rewritten more and more, I love that Magellan is portrayed accurately as a devout Christian, though not perfect.

The Imagination Books are set in the town of Odyssey where John Whittaker owns a store with a soda fountain. Oh, and did I mention the Imagination Station in the back that allows children to time travel to take part in exciting moments in history?

Our Experience with Islands & Enemies

Because the book starts out with very-typical-conflict that all of us homeschooling parents deal with regularly. Beth is being a know-it-all and Patrick is annoyed. They both behave badly.

After we read the first chapter of the book, we actually talked about their conflict. I asked some questions:

This led to some good discussion.

What We Learned from Reading the Book

We learned a lot about Magellan and his trip around the world. It actually caused us to take a rabbit trail and learn more about his voyage.

We learned about life at sea for those daring explorers of the 16th century.

We learned a little bit about dolphins.

We learned about relationships–how easy it is to hurt a relationship–though this was very subtle.

What We Liked about the Book

My grandchildren actually were super-excited for me to read the book. They have read a few of the Imagination Station books and they saw that this was a new one.

The book was engaging. No need to ask them to listen or be quiet. They were attentive each time we read all the way through the book.

This is What We Enjoyed:

All in all, it was a five-star thumbs up!

Who Will Enjoy Reading Islands & Enemies

This is a great read aloud book because it has enough action and is well-written so that it appeals to all ages. Even teens read Imagination Station books. My youngest grandchild is 3 and loved the book.

It is a great choice for an older struggling reader because it is an easy read for children, but it is interesting enough for older kids.

How to Add Islands & Enemies to Your Homeschool Day

If you are studying American history next year, this would be a perfect read aloud when you study the Age of Exploration.

Children could read this book on their own during free reading time.

Or use this as a family read aloud any time.

It would be a great book to read and talk about in a book club setting for children.

You can tell I really like Odyssey’s Imagination Station books! You can learn more about them HERE.

Here are the 28 books in the Imagination Station series so far:

More about Focus on the Family

Would you like to learn more about Islands & Enemies and other books from Tyndale’s Imagination Station? You can read more reviews from the TOS Review Crew HERE.

Check Out Our Review Crew Blog

I also encourage you to check out The Old Schoolhouse’s Review Crew Blog. You can read reviews on all kinds of homeschooling products for all ages.

I highly recommend this book! You will be inspired by Patrick and Beth’s teachableness and faith! In fact, I recommend you collect all the books in the Imagination Station series!

Tell the world what you have found here!
Tags: Age of Exploration, Imagination Station, Magellan