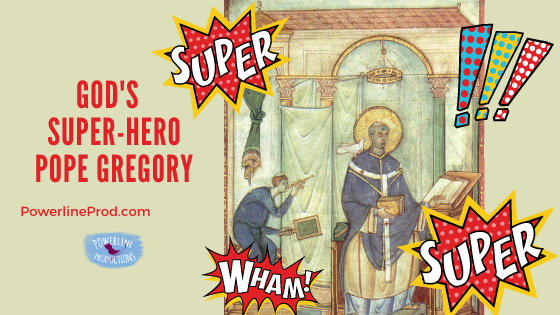 Many men dream of greatness and live ordinary lives instead. Gregory wanted to live the simple life of a monk, but God had other plans.

Pope Gregory (circa 540-604) was born after the Roman Empire had collapsed, but had a illustrious family history and was born into a noble family.

His great-great grandfather was Pope Felix III (serving before popes took vows of celibacy) and his father was a senator and Prefect of Rome. He had aunts that were nuns and his parents joined the cloisters later in their lives.

Gregory grew up in a very wealthy family. They owned lavish homes on the island of Sicily, providing a comfortable income. Gregory excelled at his studies, especially law.

Gregory became a Prefect of Rome. That meant he was the chief administrator of the city. He was responsible for police, public works, administration, and finances. It was a hard job and Gregory excelled.

Life as a Monk

After his father died, he had the family villa in Rome converted to a monastery, San Gregorio Magno al Celio. You can visit it today if you go to Italy. Gregory became a monk and lived a quiet life of contemplation and prayer.

These were the happiest years of Gregory’s life.

During these years, he spent hours and hours studying the Scriptures in great detail. He devoted himself to fasting to the point that it affected his health.

Monk Gregory dressed simply and gave up all his worldly possessions. He lived a simple life and planned to do so the rest of his life. That was not to be. ​

Pope Benedict remembered Gregory’s administration skills and appointed him to various administrative roles. In A.D. 589, a flood destroyed Rome’s grain reserves. This was followed by famine and plague.

Gregory is a New Kind of Pope

Pope Pelagius was killed and Gregory was elected to succeed him. Gregory declined, but eventually was pressured to take the role.

As Pope Gregory I, he immediately called for the Christians in the city to repent and pray for God to heal their city.

He fed the citizens of Rome from the church’s storehouses and set up a relief system for the poor. He gave some church lands to the poor.

Priests were commanded to go out into the streets to find the poor and care for them in person. Those who refused were fired.

Church assets were liquidated and used to meet the needs of the poor and needy.

His next task was to clean house. He removed church officials who were guilty of “pride and misdeeds” and reminded priests and monks of the call to celibacy (by his time celibacy was a requirement for the priesthood). He cut waste and managed church property efficiently.

Pope Gregory refused to eat until all the church leaders returned from feeding the poor. Each evening, he made sure to have poor people eating with him at his table. His heart for the poor earned him the devotion and respect of all of Christendom.

Pope Gregory saw himself as a servant and spiritual father. He continued to dress simply, as he had done as a monk. He wrote a book for church leaders called On Pastoral Care. Century’s later England’s King Alfred the Great would translate this amazing work from Latin into English. This classic is still read today for insight on shepherding God’s flock. ​

“Who are those angels?” Pope Gregory asked his assistant one day, pointing to some Anglo-Saxon slaves. They were beautiful with blond hair and blue eyes.

“They are not angels. They are Angles from England,” the assistant replied.

“Well, let’s send the Gospel to them and make those Angles Angels,”

When the Lombards attacked Rome in 592 and held her under siege, Gregory was asked by the government leaders of Rome to negotiate for peace.

When the leaders broke the peace, Pope Gregory was forced to work on a separate peace treaty.

This set a precedent for the pope to be involved in civil affairs, as well as church leadership.

Gregory the Songwriter and Musician

Pope Gregory was also a great musician and singer. He loved to worship the Lord!

He worked hard to make the Mass uniform throughout the entire church so that wherever you were living or traveling, the prayers and songs would be the same.

He worked on the chants of the church, simplifying some and adding flourish to others.

The Gregorian Chant is named after him because he wrote many and perfected other cants.

He was a great hymn writer, too.

Pope Gregory is also credited with the first musical notation. In an attempt to share songs, he invented little marks over the text to communicate how to play and sing the song.

His method was adapted to eventually become the musical notation of today.

In addition, he started the first church choir. A group of singers attended all the special services he officiated to sing.

So next time you listen to a choir or look at sheet music, think about Pope Gregory.

Legacy of Pope Gregory the Great

Pope Gregory called pastors to biblical standards of leadership and got rid of those who refused to comply. His book Pastoral Care is still read by pastors today!

He brought music into the church with a flourish creating choirs and musical notation. He was a songwriters, arranger, and administrator.

All in all, Pope Gregory was a humble man, a strong leader, a passionate worshipper, and a loving pastor with a heart for the poor. What a great hero! ​

Pope Gregory is just one of the many Christians heroes we can celebrate!

John Huss is just one of the many Super-Heroes God has used to change the world. God has a plan for you, too, and your family! Inspire them with Christian heroes!