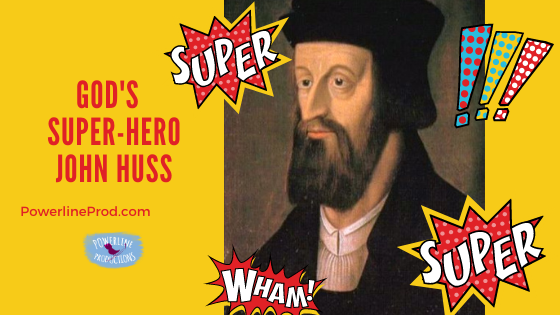 Born to a devout peasant family in Bohemia (modern-day Czech Republic), John Huss, or Jan Hus, (1369-1415) was ordained in a priest in 1401. He taught at Charles University and preached at Bethlehem Chapel in Prague.

A follower of John Wycliffe of England, John meticulously copied Wycliffe’s works that found their way to Bohemia. This was, of course before the printing press was invented. Like Wycliffe, he emphasized the Bible as central to life and doctrine for the church. He lived of life of purity and devotion to Jesus.

John Huss could not figure out why Jesus washed the disciples feet, but folks kissed the pope’s feet. Or why Jesus walked barefoot and had no home to call his own, but the pope lived in luxury, wearing fine clothes. He was also horrified that the pope and other high church officials were indulging in sexual immorality.

The archbishop of Prague told Pastor Huss to stop preaching and burn all Wycliffe’s books. Huss refused and began to preach against indulgences. Not surprisingly, the pope excommunicated John. However, that wasn’t all—the pope excommunicated the entire city so no-one could receive the sacraments. People were upset! Huss left Prague, but continued to preach out in churches that invited him, as well as outside in fields. Common peasants flocked to hear him preach.

Though John Huss believed in the authority of priests, bishops, and other church positions, he believed that only God could forgive sins. He also boldly proclaimed that no one could establish a church doctrine, or belief, that was contrary to the Bible. He wrote books explaining these things, stirring up a renewed interest in Scripture.

Called to Defend His View

John Huss was called to the Council of Constance and promised safe conduct by Emperor Sigismund. He was deceived. When he arrived at the council to defend his teachings, he was arrested. You see, the church had already condemned Wycliffe and John Huss agreed with Wycliffe.

John refused to renounce his teachings. He declared, “I would not for a chapel full of gold, recede from the truth.” Of course, he was condemned by the church authorities and sentenced to be burned at the stake.

Before they lit the flames, Huss stately firmly, “God is my witness that the evidence against me is false. I have never thought nor preached except with the one intention of winning men, if possible, from their sins. Today I will gladly die.” The executioner lit the fire and flames surrounded him. What did John Huss do? He began to sing!​

His martyrdom stirred up his followers to break with the Roman Catholic Church and start their own church. They were known as Hussites. Their denomination was the Union of the Brethren, eventually laying the foundation for the Moravians.

He is just one of the many Christians heroes we can celebrate!

John Huss is just one of the many Super-Heroes God has used to change the world. God has a plan for you, too, and your family! Inspire them with Christian heroes!

Tell the world what you have found here!
Tags: Christian Hero, Heroes for Jesus, John Huss