An Emotional Visit to the 9/11 Memorial 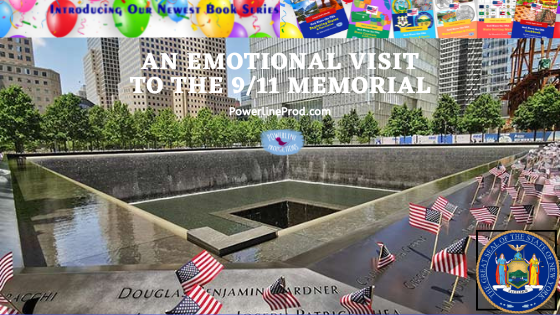 My husband had to represent his company at a trade show and he invited me along. He had a few hours each afternoon for sightseeing and at the top of his wish list for the trip was a visit to the 911 Memorial and the World Trade Center. I was eager to go with him.
​
This was an important visit for him and he didn’t want to get lost, so he asked the concierge at his Times Square hotel for directions on how to catch the subway to the memorial. He read that this was the most cost-effective and fastest way to get there. He had very clear instructions. Get on the train at this station on the corner. Get off the train at that station and the memorial will be right there. Badda-bing, badda-boom! Nothing could be simpler. Right? Wrong!!

The problem began when the concierge didn’t say which exit to take out of the station. We took the wrong one. The memorial was not right there. The GPS on his phone seemed very confused and could not tell where he was. He zoomed in. He zoomed out. He thought he found us on the map and knew which way to walk. Five blocks later we realized we were wrong. We found the Freedom Tower, took a left, walked around some construction sites, and finally found the memorial.

We walked up to the first of two reflecting pools which are dedicated to the more than 3,000 people killed on September 11, 2001, and the previous attack on the same towers in 1993. Reading the names engraved in the enormous bronze panels which frame these huge pools surrounded by manmade waterfalls wrenched our hearts. There were men and women, as well as women with unborn children represented there. As we rounded the second pool, we recognized that there were workers in the Twin Towers, employees of the Pentagon, passengers on all four airplanes involved, as well as fire-fighters, police officers, and brave soldiers who knowingly rushed into harms way to try to save anybody they could, all named here.

That’s the part that really got to us. We were lucky all those years ago. Our loved ones didn’t disappear that day, like these thousands of people. Visitors could tell the ones recently visited by their loved ones because they had a rose tucked into their name.

Walking through the park we noticed some signs. These signs included rules for the memorial park. We live in a country where free speech is a prized right, but in this park, there will be no demonstrations. There will be no fireworks. There will be no game playing, loud noise making, smoking, sleeping, or loitering. There is a long list of rules, basically teaching people how to treat this place with the solemnity that it deserves. It seems a little sad that the signs had to be posted, but it’s good they were there.

You can learn a lot about geography when you travel! You might want to take this trip with your family. OR join us at True North Homeschool Academy this fall and travel to every state and inhabited territory in our US Geography class (Jr. High but open to high school students). Purchase online class HERE. 40% off coupon to make the total price $90 for $215 worth of US geography digital resources! That’s a deal!

Heading Back to the Hotel

Our time was up, and he needed to get back to Times Square so we endeavored to find the subway station. My husband broke out his phone again and gave the GPS another try. There it was, right by the memorial, like the concierge had said. We took a quick and brief detour to look more closely at St. Paul’s Chapel, Trinity Parish which was spared damage even though it is just a couple blocks away from the twin towers. Opened in 1766 and attended by George Washington at one point, this old building was miraculously protected from flying debris. What an inspiring way to close out a visit to the memorial.

This was not the end of the adventure however! Wee soon concluded that Charlie Brown’s teacher does all the most important announcements for the New York City subway system. As we stood on the platform waiting for the E train which would take him directly to our hotel we heard, “The E train has been diverted at wa-wa-wa-wa-wa. Take the C train to wa-wa-wa and wa-wa-wa-wa-wa.” Then all the people standing with him on the platform ran away. Was this an effort to sort out all the tourists? Who knows, but it seemed that the five people left there were all in the same boat, … visitors from out of town, without a clue of where to go now or what to do.

We’re a smart couple. We could figure this out. Right? Sure! Why not? Earlier we had seen that the E train and the C train ran on the same track for most of the trip back to his hotel. The E train just made a right turn at 50th and the C train passed Central Park and moved on to parts unknown. We could just hop off before that street and grab an E train to the hotel. What could go wrong? My husband was not so naïve. He was concerned.

We found the stairs to the C train’s platform. We climbed aboard the already loaded subway car and inched through Manhattan. Nervously We watched the stops go by. We watched trains wiz past in the opposite direction. “Was that an E train? Should I get off and try to switch? What station are we at anyway?” These questions ran through our minds again and again.  When we had his fill of being flung back and forth by the inertia of the starting and stopping train we got off.  It was possibly 14th street.

In a surprising act of vulnerability, my husband approached a transit authority employee on the platform. “Get in the train! The train won’t move till you get out the way! Get on the train and let the door close!” She was yelling at inattentive passengers on that C train we just left. Then she turned to us with a smile and said, “You’re never lost when you’re in New York City Honey! Where you tryin’ to go?”

She gave us clear instructions to get to the E train’s platform and sent us happily on our way. We followed her instructions, then shortly an E train rolled up right in front of us. As promised it delivered us right to our hotel. Okay, so it was actually an underground station across the street from our hotel and we had to climb ANOTHER flight of stairs, but we were “home.” That’s all that mattered at that point.

Visiting New York City with its hustle and bustle is something everyone should experience once in their life. But if you get there, take a moment to savor the stillness and reverence at the 9/11 Memorial. It’s an experience you won’t forget.

Tell the world what you have found here!
Tags: 911 Memorial, NYC, US Geography

Daughter of the King of kings, wife of one man, mother of three men and one princess, grandmother of four children (and six dogs and two cats). I love Jesus, my family and friends, music, art, science, math, cooking, baking, and helping parents with raising and educating godly children.