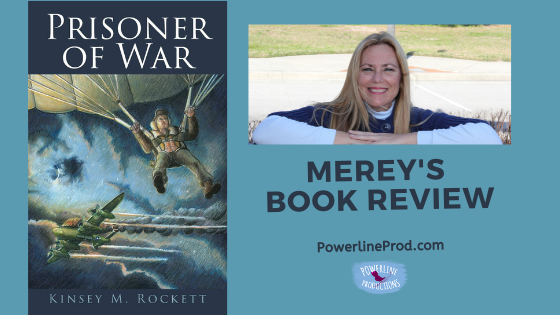 Disclosure: I received this complimentary product through the Homeschool Review Crew.

Prisoner of War by Kinsey M. Rockett from Whatsoever Stories took me back in time to World War II to meet pilots, gunner, and soldiers who risk their lives behind enemy lines. Thrilling, wholesome, and adventurous are the words that come to mind about this work of Christian fiction, but they are inadequate to describe the bravery of the men I came to love and respect in the pages of this book. Nathaniel, his brother William, Zach, and Robbie were just a few of the heroes that kept me on the edge of my seat. I found myself tensing up my whole body many times as the brave men went on daring missions–and, of course, things just had to go wrong.

There was enough action for my son and husband. They love for stories (in books or movies) to move quickly and keep the action going. However, for me there was enough relationship building and side stories (like the precious little sparrow) to keep me engaged as a lover of drama rather than action.

My favorite part was the true literary finesse of the book. The plot was well done and kept you cheering on the heroes until the end. The characters were real and likeable. There was a touch of symbolism and foreshadowing that made my heart sing as an English curriculum creator. The dialogue was realistic. Best of all, it was Christ-honoring in a beautiful way. The timeless message of salvation was portrayed through a soldier who grabbed the wrong parachute early on and a Christian man who gave his up later in the story. That timeless tale of Jesus love for the world was etched throughout the book in a thoughtful way.

I think this book would make a great movie! Kendrick brothers? Are you listening?

The author did a great job capturing the bravery of that amazing generation of World War II Allied soldiers that fought with a courage you seldom see today.

Our Experience with the Book

We read the book on our own cover to cover. It was a great jumping off point for learning more about World War II.

We used maps to try to figure out where the action in the movie took place. They were in England and flew over the English Channel into enemy territory.

What We Learned from Reading the Book

Though Prisoner of War was fiction, the author shared in the back of the book of several similar incidents that took place during World War II: special ops behind enemy lines, rescue of prisoners, planes being shot down with pilots and crew stuck behind enemy lines, and digging tunnels to get out of German POW camps.

The book highlighted the French Resistance (at the end), the brave pilots, and how the crew and soldiers worked together. Several daring landings took place because of enemy fire. We learned how flying a plane in World War II was a not a one -person job as the pilot interacted with the men helping him keep the plane flying safely.

Learning Rabbit Trails from the Book

We look at a lot of different maps of Europe to try to figure out where the characters were at different points in the story. The map below shows all the places Hitler conquered, so once you cross the Channel, it was dangerous.

Other rabbit trails included learning about World War II planes. We found a lot of interesting videos on YouTube in our search.

We also watched some videos of World War II survivors share their stories! This was really touching.

What We Liked about the Book

Here are the things we really liked:

Who Will Enjoy this Book

Honestly, I think this book has wide appeal!

How To Add Prisoner of War to Your Home School

I immediately thought of two of the classes I teach: HIS Story of the 20th Century and American History. Reading this book as historical fiction in either class would be a blessing to the students.

Prisoner of War would make a great Book Club read. I could see adults or teens enjoying reading the book and getting together to discuss it.

Do you want to learn more about Kinsey Rockett? Read her bio HERE.

Would you like to learn more about Prisoner of War and other books from Whatsoever Stories? You can read more reviews from the TOS Review Crew HERE.

Check Out Our Review Crew Blog

I also encourage you to check out The Old Schoolhouse’s Review Crew Blog. You can read reviews on all kinds of homeschooling products for all ages.

I highly recommend this book! You will be inspired by the pilots, gunner, and soldiers who risked their lives behind enemy lines!